The Tax Foundation recently highlighted Lt. Governor Griffin's call to phase out Arkansas's income tax. Below are some of the excerpts from that piece, which can be read here:

"Arkansas Lieutenant Governor Tim Griffin recently announced his goal for the state to eliminate its income tax...Lt. Governor Griffin's desire to make the Arkansas tax code more competitive is praiseworthy. Currently, Arkansas ranks 45th overall on the Tax Foundation's 2021 State Business Tax Climate Index, so the state has a long way to go before it becomes the tax envy of its neighbors.

In short, Lt. Governor Griffin's goal to eliminate the income tax is a commendable one that should be considered with cautious optimism...In the meantime, there is plenty of space for incremental improvements in Arkansas's income tax that will make the state more competitive." 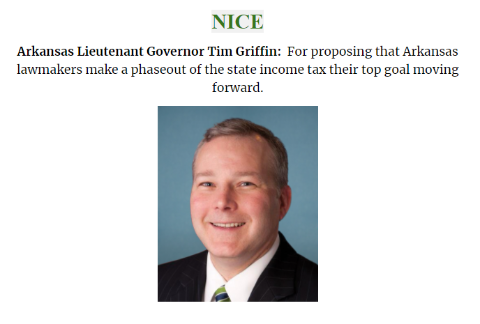